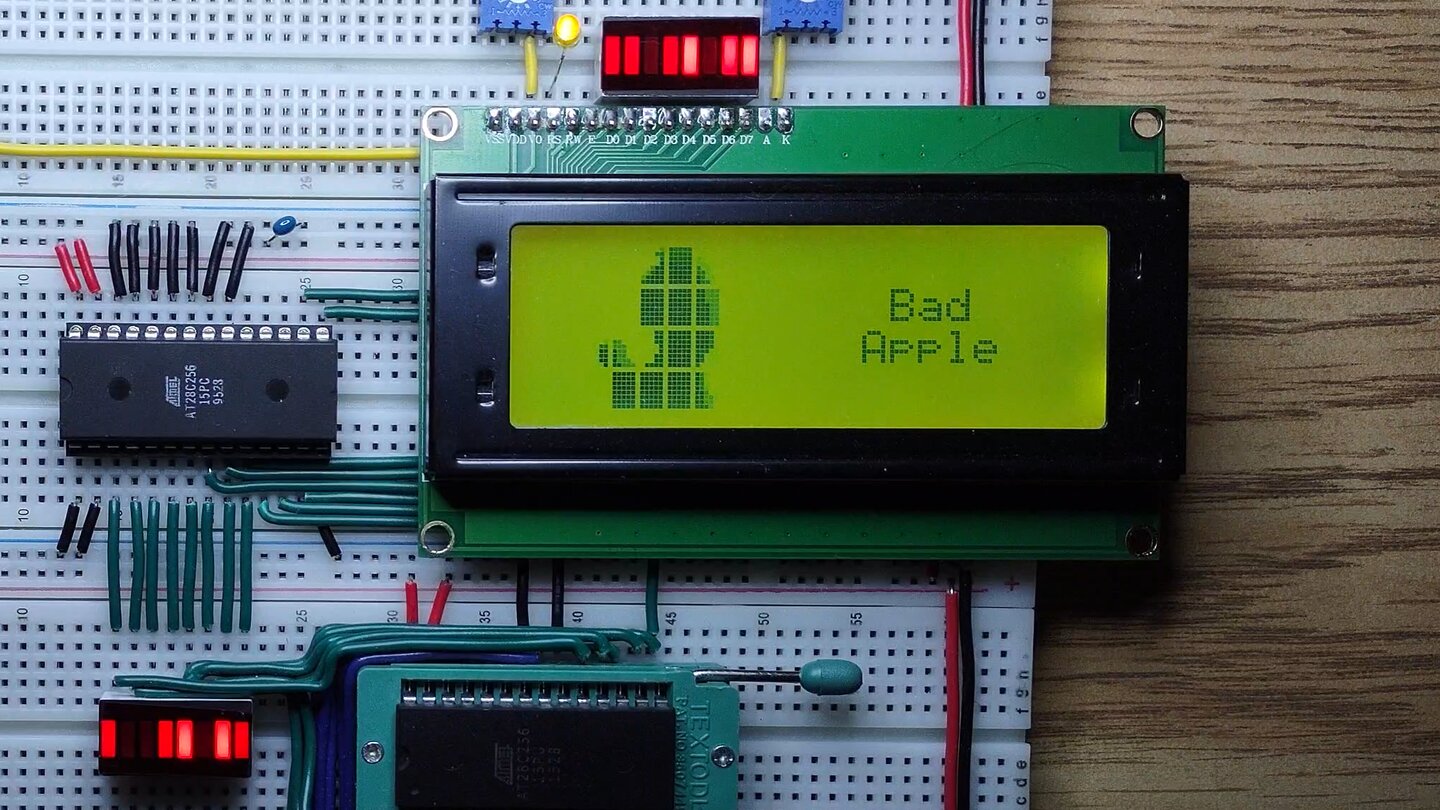 This is part one of a two-part series. Read part two here.

This post covers how we interface a 32K EEPROM, a clock and an address register to a 20 x 4 LCD character display module and use it to play a video. We “decompress” the video by expanding our 8-bit data stream to 9 bits for playback in hardware. There is no CPU or microcontroller involved.

To test step 1 of the homebrew cpu project we’ll see if we can play an actual video from the EEPROM to the LCD character display module. Bad Apple is an ideal video for this purpose: it’s essentially monochrome and most of the video is recognizable even at a very low resolution. 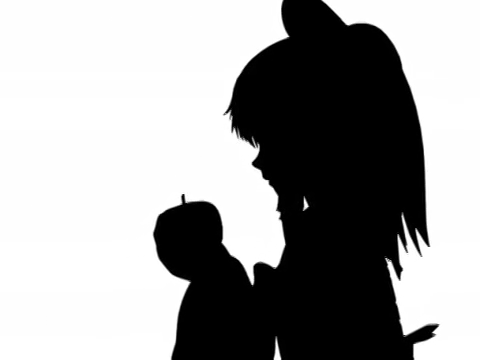 This gives us about 5 bytes of data per frame of video, or a constant video bitrate of 1.2 kb/s.

Bad Apple has a 4:3 aspect ratio which maps nicely to the 40 x 32 total pixels in our video area of 8 columns and 4 rows.

The character ROM on the LCD display module includes a “space” character with none of the pixels set and a solid block character ('\xff') with all pixels set. These can be used to quickly paint the solid parts of the video area.

The pixel patterns are given by the low 5 bits stored at each CGRAM address. CGRAM is contiguous but we number the addresses based on the character and row. E.g. C10 is the first row of CG1, and follows immediately after C07.

This code table can be expanded into a grid like the character ROM grid above:

We can see there are some unused values, like most of the function set range and part of the set DDRAM address range. There are also some commands with duplicate values like cursor or display shift commands and return home.

The EEPROM can only output 8 bits at a time but we need 9 bits including RS to fully control the LCD display module.

If we add a 256-byte lookup table for RS then we can combine sending character codes and LCD commands into 8 bits. Also if we reassign the upper 4 bits (DB4-DB7) we can assign new positions for commands in the table.

This is how the lookup table is wired to RS and the upper 4 bits (DB4-DB7): 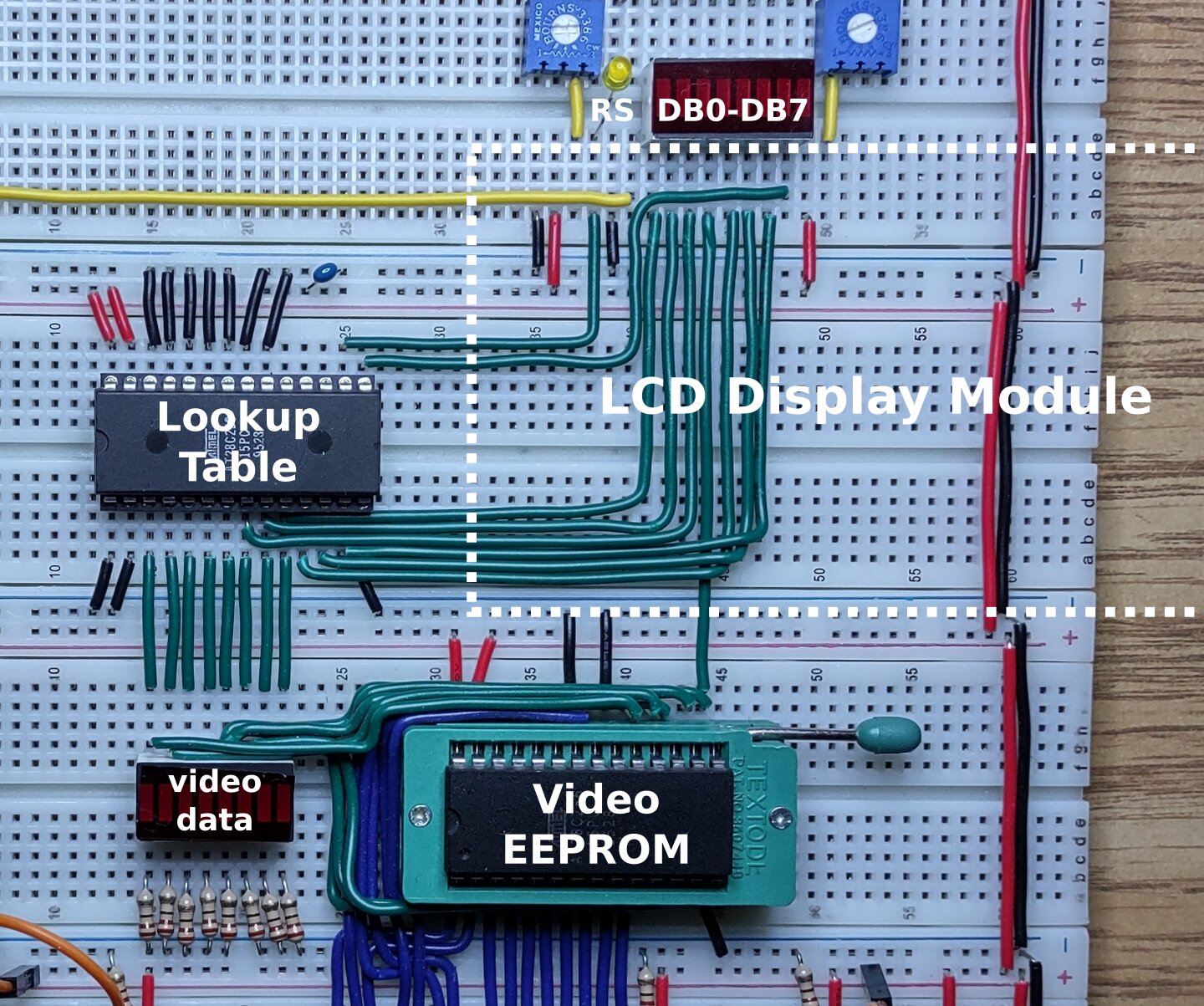 In the table reassigning the upper 4 bits is the same as moving a command left or right. This lets us fill in unused values or repeated commands, move the set CGRAM address and function set commands out of the way, and replace unneeded commands.

This is the combined lookup table that we use to map 8 input bits from the EEPROM to 9 output bits for the LCD display module:

lookup_table.py is the Python version of the same table:

The second position on the left “CLR:00” is offset 0x01 in order from top to bottom:

The third position in the fifth column “14” is offset 0x42 in order from top to bottom:

All mnemonic offset values are exported from this table as simple variables in a Python module baconsts.py:

This mapping allows issuing one command per clock cycle from our EEPROM to our LCD display module including:

These are all we need to play our video and show text on the right side of the display.

👍 Thank you for reading this far. We covered the interface between our EEPROM and LCD character display module, and how we perform hardware decompression on the data stream.

In the next post we explore the software that encodes video onto the 32K EEPROM using these commands.