This is the second part of the talk I gave January 24, 2013 at the Ottawa Python Authors Group.

Part One introduces Python iterables and iterators and generators. This part covers the advanced use of generators while building an interactive two-player network game.

Generators’ ability to accept as well as produce data is useful for many purposes. The interface to generator objects is limited, unlike instances of classes we create, but generators enable a very powerful programming style.

Here is a “running average” calculator implemented as a generator. As shown in the previous section the generator state (total, count) is stored in local variables.

Notice the extra parenthesis around the first yield expression. This is required any time yield doesn’t appear immediately to the right of an assignment operator.

This type of generator is driven by input to .send(). However, the code inside a generator must execute up to the first yield expression before it can accept any value from the caller. That means that the caller always has to call next() (or .send(None)) once after creating a generator object before sending it data.

If you try to send a value first instead, Python has a helpful error for you.

So let’s call next() to advance the program counter to the first yield expression, then start passing values we would like averaged.

The flow is always the same when working with generators.

For generators that are driven by input to .send() no data is transferred in the first 3 steps above.

We apply our decorator to running_avg().

And now we don’t need to call next() every time we create a new running average generator.

As shown, one of the ways to pass a message to a generator is with .send(). This interface allows you to pass a single object to a generator. For this object we can pass tuples, dicts or anything else we choose.

You decide the protocol for your generator by documenting the types and values of objects you will send from caller to generator and yield from generator to caller.

Tuples are perfect for a generator that needs two objects each time, e.g. a player number and a key press.

This is a Rock-Paper-Scissors game where each player’s play is passed in separately, and once both players have played the result of the game is yielded. Players can change their mind choose a different play if the other player hasn’t chosen yet. Games will continue indefinitately.

The outer while loop runs once for each full game. The inner while loop collects input from the users until the game result can be decided.

We play this game by passing (player number, play) tuples to .send()

It makes sense to design your generator protocols so that any waiting has to be done by the caller. This includes waiting for user input, IO completion and timers. The rock, paper scissors example above and all the examples to follow are designed this way.

The benefit of waiting in the caller is that other processing (and other generators) can be “running” at the same time without needing multiple processes or threads.

This generator sets the terminal attached to fd into “cbreak” mode when it is created and then restores the original terminal setting on exit. cbreak mode allows reading each key the user types as they are typed, instead of waiting for a full line of text.

Note that the first yield statement is inside the try: block, guaranteeing that the finally: block will be executed eventually. The first yield statement yields None (which is what is expected by the advance_generator_once decorator). The advance_generator_once decorator makes sure next() is immediately called on this generator after creation, so the terminal is always set to cbreak mode after the caller calls cbreak_keys().

The finally: block in this generator is useful in normal operation and for debugging. When the program exits the terminal will be restored to normal mode. If the terminal is left in cbreak mode tracebacks shown will be sprayed across the screen in a hard-to-read manner, and the user’s shell prompt won’t echo input normally.

Testing this generator involves creating a “psuedo-tty” for the generator to connect to, then simulating user input on that pseudo-tty. In this test we read just 5 characters because reading any more would block.

We still hold a reference to the generator, so our pseudo-tty is still in cbreak mode.

When the caller uses the .close() method it expects the generator to exit. If the generator yields a value instead, .close() raises a RuntimeError. Generators must exit normally or raise an exception when a GeneratorExit is raised.

Sockets are another type of external resource that needs to be properly managed.

When using sockets it’s polite to shut down the socket so the other side knows you’re done sending. It’s also a very good idea to close the socket to free up the file descriptor allocated by the operating system.

This generator reads individual characters from a socket and on exit politely tries to shutdown the socket, and next ensures that the socket is closed.

Testing socket code takes quite a few lines of boilerplate. We have to find a free port, set up a server socket and then accept a client connection as another socket object.

We send some text and immediately disconnect the “client” to verify that our generator exits cleanly after reading all the data on the “server” side.

The socket object has been closed, so if we try to wrap another generator around it we expect to get an error.

Telnet is a protocol for allowing untrusted, insecure connections from remote hosts. It’s one option for plain terminal connections, and almost every operating system comes with a client.

Starting in telnet normal mode all bytes except 255 are user input. A 255 byte enters command mode, which is followed by either one command byte and one parameter byte, or a 250 command byte and any number of subnegotiation bytes ending with a 240. On the transitions we mark True for user data and False for part of a control sequence. 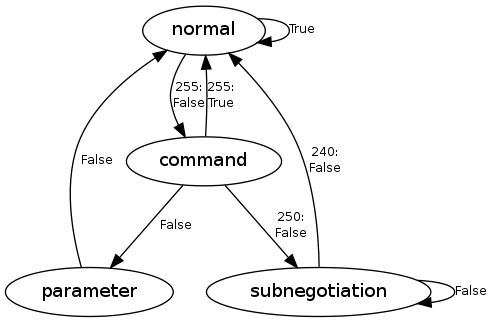 The generator that implements this state machine isn’t much longer than the diagram that describes it. The states “normal”, “command”, “parameter” and “subnegotiation” are represented as yield statements. The transitions are normal python flow statements while: if: and continue.

The pattern of storing the result in a local variable actual_input is used here for the “normal” state because some transitions to the normal state yield True and others yield False.

It’s easy to combine simple generators for more advanced functionality. We can combine our socket_read_and_close() generator with some new telnet negotiation and our telnet_filter() generator to make a new “clean” character-by-character telnet input generator. This generator will yield only the user input from a telnet connection.

Be careful of when combining generators, though. If a “child” generator raises a StopIteration exception when you call its next() method that exception will propagate normally in the “parent” generator, causing it to exit as well. This can lead to some hard to find bugs, so always think about what you want to happen when your child raises StopIteration. If you want to handle StopIteration you can catch it like any other exception, or you can use the default parameter of the next() builtin function when advancing the child generator.

In this case we do want the new telnet_keys() parent generator to stop when the socket_read_and_close() child generator does, so we let its StopIteration exception carry through.

We should be able to play it with single keystrokes on the console. Opponents (guests) should be able to connect to play against us. Once they connect we should play a few games before we choose a winner. We need to handle a guest disconnecting before all the games have been played. Also, if the guest waits too long to make a move they should be disconnected so someone else can play. Finally, we should have reporting of how well we’ve done against all the guests that have connected.

For the game itself we can lay out the states and transitions. There are only really two states: “waiting” for a guest to connect and “play” while we’re playing. “Moved” and “win” below are just steps in deciding whether we end up in the “play” or “waiting” state.

There are many transitions with different effects. When guest enters a play we should disable the timeout that will disconnect them. When a player has moved, play may continue because one player still needs to move or because the game was a tie. When a game ends with one player winning play will continue until a full round has been played when the guest will be disconnected. 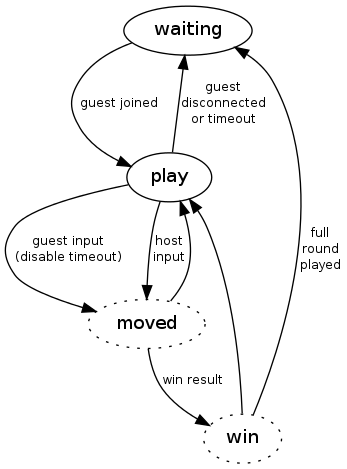 This generator is responsible for providing prompts and feedback to both players, including game results. It accepts and processes input from both players and notifies players when their input is invalid. It also asks the caller to disconnect the opponent once enough games have been played by yielding 'waiting'. Finally this generator manages control of the opponent timeout by yielding 'reset timeout' when the timer should be (re)started and 'disable timeout' when the opponent has entered a valid play.

The caller is responsible for receiving input from the users, sending output to the users and informing the generator when the opponent connects, disconnects or has timed out. The disconnect and timeout conditions are somewhat exceptional so they have been implemented with the use of the generator’s .throw() method.

Exceptions passed to a generator’s .throw() method are raised within the generator from the current yield statement, just like how the .close() method raises GeneratorExit. Exceptions may then be handled by the generator with try: except: blocks. Here we handle the exceptions by printing a message and returning to the outer while: loop (the “waiting” state).

To test this generator we need a simple output function with a default value for the player parameter.

Driving an event loop with a generator

Now we need to pull all the peices together in a way that a select.select() loop can run the whole thing.

This generator accepts input on the console for player 0 with cbreak_keys(), and listens on a TCP port for player 1 (the guest) to connect. When player 1 connects it accepts input on that socket as a telnet connection with telnet_keys(). Input from both players is forwarded to game_machine(). When game_machine() asks for the timer to be reset this generator creates a countdown_generator() that will be used to give player 1 a countdown as their time is running out.

The last peice we need is a main() funtion to drive our generators. All the waiting for IO and timers is done here, controlled from the generators above.

This design lets us easily switch to different event loop or async library. We could also run many of these games or many different tasks on the same event loop.

We end up with about 300 lines of code, including docstrings and more than 90% of that code is generators.

This code is a complete interactive game server. It supports character-by-character input with one player on the console and one connected by telnet. It detects players disconnecting and has a timer and countdown for disconnecting idle players. It also collects and reports game statistics.

This code contains no classes other than the simple Timeout and Disconnect exceptions. Message passing is accomplished with tuples, strings and integers.

All of the code is easy to test. The limited nature of the generator interface encourages us to break up code into small, simple, testable parts.

This code is 100% asynchronous with no threads, callback chains, queues, locking or monkey patching required.